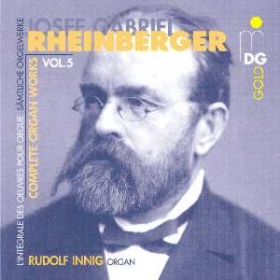 The publisher Robert Forberg, who had printed the first edition of Rheinberger’s Organ Sonata No. 8 in 1882, inquired on April 2, 1885: “Would you be willing to write some shorter pieces for organ for me, and would you also permit me to publish single movements from the organ sonatas separately?” Fanny Rheinberger remarked on this subject, “An hour later he was already sitting there at the writing desk to produce an organ sketch. It’s terrible! Easter Sunday! But the organ is his love.” (Dr. Irmlind Capelle)

Rudolf Innig has already established his credentials as a sympathetic interpreter of Rheinberger’s music and he doesn’t disappoint here. In Sonata Nr. 9 the dark, brooding key of B flat minor gives plenty of scope for arch – Romantic musical gestures, and Rheinberger’s trademark chromaticism and rising sequential patterns come at every turn of the page. In the opening Praeludium Innig keeps any feeling of predictability at bay with flowing, forward - moving tempi whilst the ‘Romanze’ is coloured by warm, glowing string sounds from the Kuhn organ at the Martinskirche in Chur, and the closing Fantasy and Fugue is again well paced. (BBC Music Magazine, 2001)