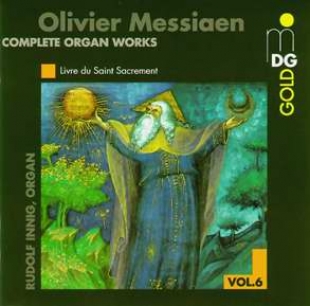 The Livre du Saint Sacrement is Olivier Messiaen's last and longest organ work, a grand synthesis of his oeuvre and a moving gesture of farewell. Unlike Johann Sebastian Bach, who did not finish his last work, the Kunst der Fuge (which, by the way, also has eighteen numbers), Olivier Messiaen had the energy and time to complete his »musical testament.« And, unlike Gustav Mahler's Ninth Symphony or unfinished Tenth Symphony, to name two compositions comparable to Messiaen's organ work in their epochal importance, the Livre du Saint Sacrement is a farewell without any trace of resignation or sadness.
As we might expect of Messiaen the composer and the man, his gestures of farewell are artistic and at the same time discreet. It would never have entered his compositional mind to refer to himself or to someone else in the manner that Bach or Mahler did in their last works. Bach cited his own name at the end of his eighteenth movement, but Messiaen would never have thought of doing the same, of signing his name in his »langage communicable« (cf. the booklet to Vol. 4). Mahler said farewell in the finale of his Ninth Symphony with a theme that outdoes the introductory idea in Beethoven's »Les Adieux« piano sonata op.81 with its double deceptive cadence. (Rudolf Innig)

“Now, the imaginative modern – specialist, Rudolf Innig, adds his alternative, and a great one at that. Rudolf Innig clearly feels the presence of something all-consuming in the score, for his performance, fundamentally, is humble and transparent, qualities nowhere more apparent than in the gossamer ‘The hidden god, a reflection on Aquina’s avowal of the deity hidden on the Cross. Yet Innig also presses the emotionally charged movements like the ‘Act of Faith’, where incessant, repeated chords alternate with Lisztian roulades and runs. Between, he steps his virtuosity in Messiaen’s sonic and theological principles. Each gesture, each interpretive nuance – and there are numerous reminders that Innig’s performance is personal and distinct – serves to enhance Messiaen’s faith. So one cannot escape the devout mystery and probity that Rudolf Innig brings in such full measure to the Livre du Saint Sacrement. This performance promises to invigorate the soul.” (Fanfare, 1999)