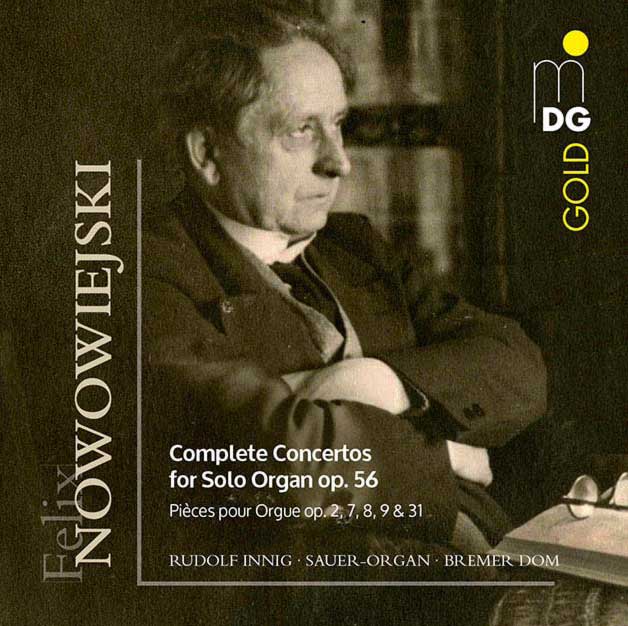 Concerted Effort
Those who expect an orchestra for the concerto form
are in for a genuine surprise. Innig employs the
magnificent Sauer organ in the Bremen Cathedral
with so much color that the strings and winds will not
be missed for a single moment. In harmonic respects
they are also highly ambitious. Why Nowowiejski
entitled these large-format, multi-movement works
“Concerti” must remain speculation. Might he have
been apprehensive about extending the number of his
symphonies beyond the magical “Number Nine”?

Personal Chronicle
Nowowiejski composed his concertos during difficult
times. World War II had just begun with the German
army’s invasion of Poland, and the composer, who
had developed close ties to Germany over the years,
became a professional and personal outsider under
the new regime. It is thus hardly surprising that these
works repeatedly display autobiographical elements –
even if the consoling optimism of the fourth concerto
of Easter orientation appears to be somewhat
premature in view of the year of its composition in
1941.

Interpretive Finesse
Nowowiejski also achieved great things in pieces of
small format. Whether the Chorale Prelude (op. 9) or
Character Pieces (op. 31), whether pieces for
religious services (Offertoire) or suitable for concert
performance (Marche solennelle) – again and again
he found individual forms of expression that Rudolf
Innig succeeds in interpreting with profoundly felt
musical sensibility. And, as always on MDG, the finely
balanced sound picture in the magnificent acoustics of
the Bremen Cathedral makes for an absolutely
enthralling musical experience.