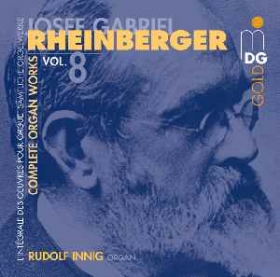 As in op. 156, the twelve Monologues are composed in all twelve keys of the chromatic scale. This time, however, Rheinberger took care to observe a regular alternation between major and minor in his ordering of the keys. Most of the pieces were composed between April 4 and 9, 1890; only the first had been written already on January 16, 1890. Here, in contrast to the preceding collection, Rheinberger does without characterizing headings; the individual »pieces« bear only tempo markings. It is not known why Rheinberger entitled the overall cycle »Monologues.« In contrast to Max Reger’s Monologues op. 63, composed ten years later, Rheinberger’s pieces are all monothematic and contain, as was customary in his music, pieces of strict contrapuntal design as well as freer forms. (Dr. Irmlind Capelle)

“Like the previous seven instalments of Rudolf Innig’s complete Rheinberger project, volume eight is an extremely well-presented disc. The performances pleasingly reflect this level of attention to detail, especially in Innig’s well-paced version of the Sonata No. 14, which is full of excitement and colour. Innig’s musical sensivity is also excellent shown on this disc, as it can be heard in many of the gently expressive movements of Monologues.” (Cathedral Music, 2003)